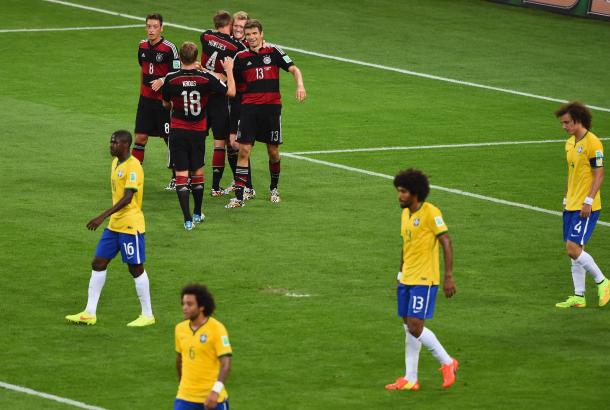 Some thoughts on last night’s massacre:
– Germany raised eyebrows when they announced that they will build their own World Cup base. It has definitely paid off so far. One of the best prepared sides for the World Cup
– Germany had one of their key players missing as well, not for this match, but for the whole tournament (Reus).
– Germany’s current team is a product of over a decade of building and continuous improvement (typical German). If memory serves me right, after Germany flunked at Euro 2000 (having previously crashed out of the 1998 World Cup to Croatia at the quarter finals), the football authorities decided to make some changes to the football set-up in the country. That resulted in four semi-finals in a row, a very strong domestic league across all levels, its backbone being young and talented players. Compare that to England where English players are overrated, overpriced and not as motivated as their German counterparts to represent their national team. Don’t get me wrong, it’s club (Liverpool) before country all the way for me, but England will not get anywhere with the football set-up on the island at the moment. Blogged about this earlier at omar.abuomar.com if anyone is interested in reading.
– What’s surprising is that this German team really struggled before the tournament vs. Cameron and during the tournament against two other African nations: Ghana and Algeria. They technically drew all games after 90 minutes, needing extra time to end Algeria’s resistance. All three African team played quite well against the Germans and could have even won.
– Huge credit to Germany for celebrating mildly and being very humble and respectful winners. They did not rub it in or celebrate wildly (at least not publicly). Classy.
– Neuer: Best GK (and makeshift defender) at the World Cup. Was funny to see how pissed off he was with his defenders for dozing off, but then again missing out on a clean sheet because of such complacency can be infuriating for a goalkeeper
– Away from the German’s brilliance, it was a weird game. I expected it to be quite tight (similar to both sides’ quarter final matches), but Germany knew how to attack and Brazil’s players were all over the place.
– Obviously Luiz was a mess (Good luck PSG with that new 50m compulsive brain farter), but I was shocked with Fernandinho’s performance. He was one of the unsung heroes in my opinion of Manchester City’s campaign (While Yaya Toure and the other more elaborate midfielders got the majority of the plaudits). He was poor, piss poor last night, but then again, who wasn’t for Brazil?
– Out of 4 million professional footballers in Brazil, there must be better strikers and attacking midfielders than Bernard, Fred and Jo, no? I mean, they could have called up Coutinho (Of course), Lucas Moura and Pato (Possibly off form) to shake things up a little, but they were stuck with an ineffective bunch of strikers. Fred reminded me of Costa’s poor World Cup for Spain, ineffectual, lethargic, slow and insipid.

– During the game I was wondering if I ever watched a team get dismantled and torn apart so easily, looking back at last season, the failings of North London clubs against the ‘bigger sides’ were reminiscent of the Brazilian performance. Also the Barca Champions League semi-final defeat to Bayern in 2012/2013 and Madrid’s destruction of Bayern in the 2013/2014 semi of the same competition.
– Brazil in all fairness have not lived up to expectations at any point in the World Cup (from what I’ve seen at least, didn’t watch the Cameron match and missed most of the first half vs. Columbia). The team seemed to progress because they simply had to, not because they were overwhelmingly superior to their opponents. Just watch the highlights of the Chile game, the Brazilian players themselves broke down in tears after the penalty shoot-out. It is one thing to be emotional, but at the end of the day a country with Brazil’s football pedigree celebrated progressing to the quarter finals as much as World Cup minnows Costa Rica did.
– End of an era? Perhaps.
– Scolari and Carlos Alberto Parreira were drafted in to manage Brazil as they were the last two men to win the trophy for the Brazilians (1994 with Parreira and 2002 with Scolari). The duo and the players definitely proved many doubters wrong in the Confederations Cup last year, playing good attacking football and scoring goals aplenty, but the weight of expectations was too heavy for them this time around.