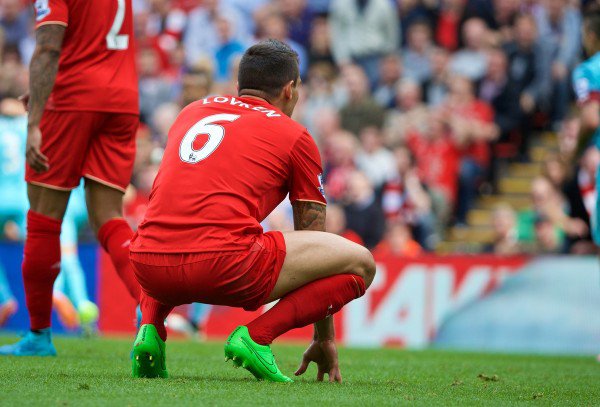 Some thoughts (read: Rant) on last night’s match, and on Liverpool of late in general. This is not a knee-jerk reaction, but a tame defeat to United is a good place to reflect on things and the state of the club.

We have been committing many mistakes all over the pitch. Not only the usual Lovren/Moreno/Skrtel etc. blunders that led to goals or at least opportunities for the opposition. We simply make too many basic errors everywhere. Poor passes, poor positioning, pressing opposition players when we should hold the line and holding the line when we should be pressing more, poor runs and build-up play, bad crosses etc etc. I lost count of the games last season and this season where I sat there admiring supposedly ‘lesser-clubs’ passing the ball, pressing well and basically not having brain farts.

This is an alarming sign, we are (supposedly) a club that aspires to get back into the Champions League and to win trophies. Seeing such errors makes one wonder whether it’s low confidence on the player’s part or if they’re simply not up to the task. if we take the second scenario, how are “professional” players like that in a side like ours? It’s embarrassing that we spend tens of millions, only to get players who fail to deliver. I know Liverpool is not exactly Rome, Paris or London in terms of allure, but if Stoke (Yes, Stoke) as a club managed to get someone like Shaqiri, then we, in theory should be able to get the likes of Cavani, Benzema etc. (assuming wages are not an issue, which they are as long as we are run by John W. Henry’s folks)

Apathy has seeped in the club, and this is a disturbing sign. We have not been relegated, but I see us resembling Newcastle more than Liverpool of old. A team that spends heavily, gets unknown players, some turn out to be good, the majority either flop or are above average at best. Look at our bench last night, after all our summer spending, we had these on the bench: Sakho, Toure, Moreno, Rossiter, Ibe, Origi. Other than Sakho and perhaps Ibe, I honestly cannot see any of these players breaking into the City or United squads, let alone the first team. These are the players that we count on to make an impact and to turn things around. Our spending on players reminds me of vacations back home to Jordan, you come back to -insert city of residence- broke, yet you struggle to recall if any of the money you spent went on things of value. As my good friend Elie Toumasays, we spend so much money on players, and yet we wonder how on earth we have no depth. We have glaring gaps in the team that needed to be addressed last summer. Now the quality gap is widening, and unless Chelsea continue to have this nightmare of a season, we will be staring at another 6th or 7th place finish.

Two things I can guarantee will happen in the coming months, if Rodgers stays on as boss:

1. So much hope will be pinned on Daniel Sturridge’s recovery, the whole talk of ‘it’s going to be like having a new signing!’. No Brendan, he’s an injury-prone player who has traditionally been low on confidence even when he was at the peak of his powers (With Luis Suarez). Sturridge was not and will never be the type of player to change games on his own. Having said that, the only glimmer of hope here is that he forms some sort of unstoppable partnership with Benteke. I personally do not think this would happen, as Sturridge has selfish tendencies (Benteke on the other hands has shown signs of being more of a team player)
2. The stadium expansion will be blamed for things like finances, funding, lack of match day ticket revenue, entirely overlooking the extra money we are pocketing from the new TV deal.

It’s frustrating, It’s mind-numbing, it feels as though we are being dragged back to the Roy Hogdson’s dark ages of aimless, hopeless and toothless matches.

One last thought: No matter how much they cost, the strikers featured yesterday were:
1. One of a relegated club (Ings from Burnley)
2. Two from clubs that narrowly avoided relegation (Benteke from Villa and Firmino from Hoffenheim
3. One from a team that finished 8th in the French league and only scored six goals in two or so years.

The above screams mediocrity. Teams like Napoli, Marseille and Valencia have better teams from the looks of it and they do not have half our transfer budget (I think. Statement not backed by actual research)