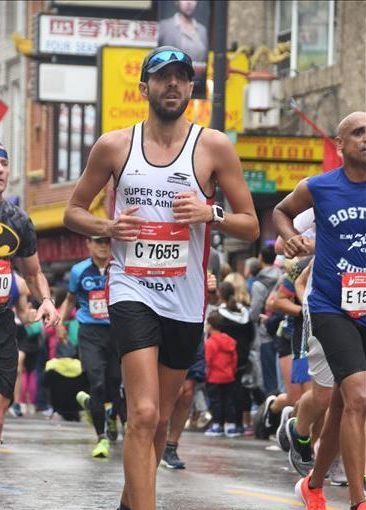 Beyond the beaming post-race photos and posing with the medal with the stunning backdrop of the biggest city in the state of Illinois, there was frustration and a hint of disappointment. Earlier this month, I took part in the 2018 Chicago Marathon. My official time was 3:41:32. There are two ways to look at the race, it can be looked at through rose-tinted glasses, or from a more realistic outlook. In this race report, I will go over the race preparations and the race day experience.

I earned a spot via the general ballot, which was a great relief after having had to pay for sports packages to run my previous two full marathons in Berlin and Paris. The communication by the organizers was impeccable in the months leading up to the race, with engaging and interesting social media posts to boot.

I started training for this on the back of my best season to date, I crushed multiple PBs across all distances from 3k all the way to full marathon. After the season ended before Ramadan, there weren’t that many races in the lead up to Chicago, so I couldn’t really gauge my fitness levels and build momentum, however and on the flip side, on paper, there was plenty of time to train and to experiment with long runs. Racing is great, however, you do lose some training time as your body needs time to recover after every race.

I started my ‘proper’ training after Ramadan (Mid-June), and to try and overcome the mental barrier of long training runs in the muggy Dubai summer, I started with focusing on long runs based on time, with the first long run being 2:00 hours long with no emphasis given to pace. Then, I followed it up by adding 15 minutes to every long run until I reached the 3:30 hour mark, then I went back to the start pretty much, restarting my training with a 21km run, and running some portion of it at what is the equivalent of race pace (running based on effort, rather than actual pace considering the heat and the humid conditions). All was going well until the Eid Al Adha break (Around the 3rd week of August). During that break, I went with the family to Vienna, and I decided to do my long run with segments of the run at the actual race pace, towards the end of that jog, my right hip started cramping up, but I was able to complete the 30km run as planned.

Unfortunately, that long run had consequences. The hip/glute muscles were not right for a while, and while physiotherapy sessions did wonders to get me (more) ready for the race in Chicago, but the pain popped up every now and then in training runs and at the only long distance race I did in the lead up to Chicago, which was the Budapest half marathon four weeks before the marathon. Incidentally, my time there was identical to my second fastest half marathon time.

As they tend to be in most western countries, the race was on a Sunday morning. I had booked the direct Emirates flight from Dubai, leaving on Friday morning and landing in the afternoon (local time). I barely managed to get any sleep on the plane despite taking a sleeping pill, by the time I got to my hotel room in Chicago, it was already 6 PM local time (which means I had been up for almost 24 hours, as the time difference between Dubai and Chicago is 9 hours). I decided to go to the Expo to get my bib for the marathon and for an “International 5k” that was held on Saturday (which was my shakeout run). I got the bib, and got a couple of memorabilia items and gifts and made my way back to the hotel.

It poured heavily early morning on Saturday, and hence, the International 5k was delayed for about fifteen or so minutes to ensure the safety of the runners. The rain stopped, and the race went underway. It was a fun experience running around the streets of Downtown Chicago with no pressure, and with multiple photo stops of some of the city’s landmarks and its famous skyline.

Race day was less than 24 hours away, and it was a lowkey day after that shakeout run: A light breakfast with a friend who is based in Chicago, followed by a chilled out day spent at the hotel. For ‘carb loading’ (something I hardly do anymore), I had a late lunch/early dinner with a couple of friends who were running the race at an Italian place. I was in bed before 8 PM (At previous races, I usually had dinner around this time). I barely got any sleep on the eve of the race (and on the previous night), I blame the jetlag and the pre-race nerves for that, however, it was a lesson learned. Next time, I will make sure I arrive at my destination at least four days before the race to acclimatize.

I woke up at around 4 AM, and tried to get back to sleep but couldn’t, so ended up having my pre-race breakfast and coffee, chit-chatted with friends and family online and got ready for the race. My hotel was about one mile away from the start area, so I opted to walk and soak in the atmosphere. It was already drizzling by that time, and wet conditions were forecasted for the race, but it was not as humid as the day before. Unfortunately for me and for many people assigned to the corral I was in, the gate we were assigned to enter the start area was basically a narrow footbridge that was quite congested, which meant that there was a very long queue for runners till we reached the security check area. Unfortunately, this meant that I was forced to miss the corral/wave I was originally assigned to despite running to drop my bag, answering nature’s call and going to the start area. The time I was aiming for was to finish in sub-3:20 hours. and the corral I had to start with was for runners expecting to finish in around 3:45 hours. As I started the race with a corral that was aiming to finish at a slower time than my target time, I spent most of the first half of the race overtaking other runners (only to be overtaken by most of them after I started limping in the last 12k). On a normal race day, the overtaking might have cost me a few minutes, however, as the hip injury made an unwelcome re-appearance from the 30km mark onwards, starting with the slower corral and the energy exerted by overtaking runners did not make much of a difference. The conditions were wet, cold and rainy, as forecasted, but the Chicagoians were out in big numbers and the support was immense, despite the pouring rain. The race was very, very well organized, and it was well-marshaled (no people with questionable mental abilities trying to cross the road with their bicycles and strollers ala. Paris), and the medal was funky and special. The race is definitely worthy of its title as one of the World Majors. There were mixed results among my friends who traveled to run the race, but a couple of them performed well and got great times and PBs. Onwards and upwards!

After the race I was too knackered, and after collecting my medal, rehydrating and taking the obligatory post-race shots, I trudged back to my hotel where I continued to struggle to sleep, even after taking a full sleeping pill (Facepalm moment). I stayed in the city for a few more days, met up with friends and did a few touristy activities (More of that on my Instagram stories (Updated on a highlights folder aptly called “Chicago”).

The main lessons learned are as follows:

For the number geeks, here are the stats from the race:

Next big race will be Tokyo in March 2019, prior to that, I will run a few local races here in the UAE.